Captioning Videos for Social Media. Should I? Why Should I? How Do I?

Acmhainní Teoranta - Digital Consultancy / Uncategorised  / Captioning Videos for Social Media. Should I? Why Should I? How Do I? 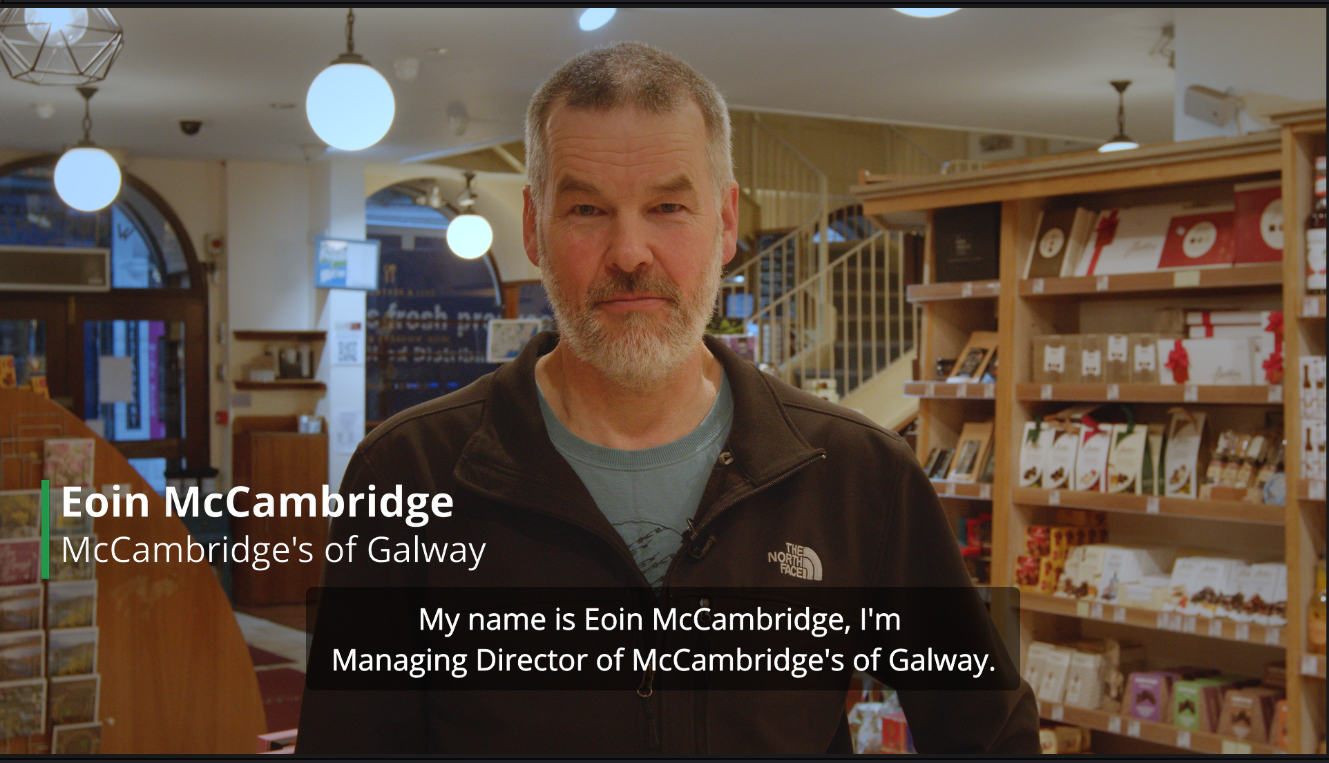 Captioning Videos for Social Media. Should I? Why Should I? How Do I?

One thing we find trips clients quite often when they’ve invested in video content for their brand, is how to make it accessible to the most people. A lot of work has gone in to putting the best possible representation of who they are and what they do forward, and there’s one small hurdle that plenty come a cropper on: Captioning. 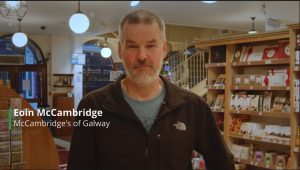 Here’s a perfectly acceptable still from a piece of video that tells us there’s a man talking to us, and a lower third that lets us know that his name is Eoin McCambridge, from McCambridge’s of Galway. But not all shots are going to give us all necessary information visually.

Videos that aren’t in some way captioned immediately exclude people who are hard of hearing, and many other users. There are plenty of other users who also consume video content with no sound for various reasons.

Given that roughly 80% of video online is now viewed with the audio muted, captioning / subtitling is a great way to make sure your message gets across.

‘Captioning’ and ‘subtitling’, although often used interchangeably, are not quite the same thing, so here’s a quick guide on the differences, relative strengths and weaknesses of both.

Firstly: What are they called, and why? It’s a little technical, but any text you see on a screen that annotates what someone is saying is usually either a closed, or an open caption. Strictly speaking, a subtitle is supposed to refer to a translation of what a character is saying in a foreign language into the language an audience speaks. However, the terms are still often used interchangeably.

Captions will also often contain information about ambient sound and music cues for those who are hard of hearing (A phone rings, a door slams, etc). 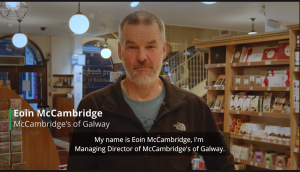 Once we’ve added captions, however, the hard of hearing community, or other users who want to watch without audio enabled for whatever reason, are included.

So basically: Subtitles are for translating between languages and usually not the one a character is speaking, and captions are to help with accessibility to your content.

So what’s the difference between Open and Closed captions?

Open Captions: Open captions are pieces of text that are hard burned into your video. You’re probably used to seeing them in margins at the bottom of social posts, or with coloured backgrounds like a classic TV subtitle.

No matter what editing software you’re using, if you have put some captions together for your video, there will be options as to how exactly they’re authored when you export. Here, we’re obviously choosing to burn them directly into the video itself – an Open Caption.

They exist out in the open, and can’t be turned on / off, translated or manipulated in any way. They’re there, and that’s it. These work well for everyone, and are often welcomed by the hard of hearing, as they make them feel the most included.

They still exist, and perform, in our modern online world, but there is arguably a better, more suited alternative.

Closed Captions: We live in a digital world, and if you’re publishing content digitally, closed captions can arguably be a better solution for your video. Closed captions are a little like hidden, secret captions. They can be turned on / off via a little cc button, usually in the bottom right hand corner of the video, and aren’t hard-burned in. 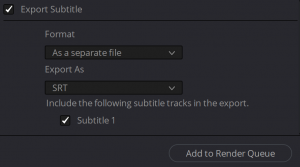 Closed captions offer us the option to burn out a “side-car” file, usually in .srt format, which we can upload separately to our video, and which unlocks a lot of important added functionality, particularly if you want to trace your video’s performance on a platform.

You upload a video as per normal, but then also upload a smaller side-car file (usually .srt), which tells the platform what text to display, when, and for how long.

They have several advantages over open captions. Namely, in terms of accessibility, it is always a good idea to take user choice into consideration. Users can enable / disable closed captions as they see fit. Viewers who are visually impaired can also usually choose a size for the text to display to make sure they’re in the loop.

The visual artist in me often balks at the thought of taking a carefully crafted and polished image and hanging text over a sizeable chunk of it, but making that content as accessible and inclusive as possible for as many people as possible is our key goal here.

The social media platform you’re using can also use closed captions in interesting ways that are quite advantageous. For example, when you’ve annotated the dialogue in a piece, and posted it as a .srt file, that becomes searchable. The same sort of bots that search your site for keywords in order to rank you for SEO purposes, can tell what your video is about, and rank you accordingly.

This buys you points in a heavily-weighted pay-to-play (Either pay money to show your ad or it will have limited organic reach) environment: Facebook, I’m looking at you… Basically uploading closed captions helps get you more views. 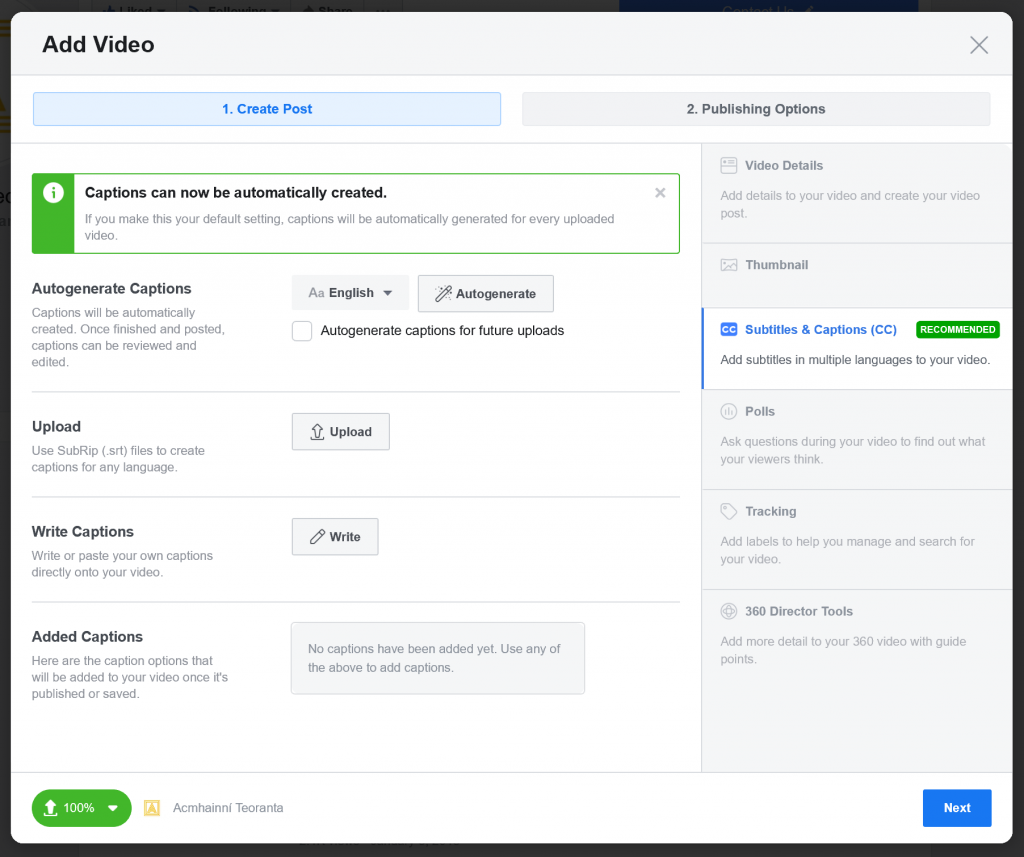 Here we see the menu that guides us through captioning a video on Facebook. We can auto-generate captions (not great with Irish accents, but a good starting point if you want to edit a badly written transcription rather than type from scratch), upload an .srt file, write a transcription from scratch according to timecode, and then select various options once the captions are there.

Closed Captions can also be translated automatically (presumably badly, but that’s hardly the point) into other languages, which is of particular use if you have an international audience. Once they’re up there in English, someone can come along, select Espanol, and away they go with an insight into what’s going on in your piece.

So What does it all mean?

Captioning your video, whilst often an after-thought for most people, really is becoming a decent way to stand out from the crowd, get more attention and views on your platform of choice, and make sure that as many potential customers / viewers as possible can find your hard work and enjoy it.

It really boils down to a question of professional best practice as 2020 rolls on, and any editor worth their salt will be able to guide you through the pitfalls. Just make sure you’re up-front that captions are something you’ll want addressed when you’re planning a shoot, so they can allot time to make that happen for you. Don’t make it an afterthought, or your budget could be impacted.

There are merits and arguments as to why you’d choose either of open or closed captions over the other, but I think perhaps I’ll leave the last word to YouTuber Jessica Flores, who sums it all up better than I ever could: